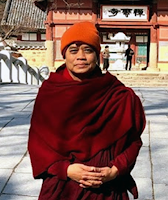 Ashin Ariyadhamma was born on May 15, 1960, to U Tun Mhin and Daw Po (Mhinpo Rice mill) in Kyaung Gone village, Toungoo Township, Bago Division, Myanmar, as the third of their four sons.

Ashin Ariyadhamma was fully ordained as a monk with Venerable Ashin Pannacakka (Aggamaha Kammatthanacariya) as a preceptor on October 19, 1986. He received his early monastic education at Mahagandhayon Monastery in Amarapura for four years, where he served in the Registrar's Office, and at Shwe Hin Tha monastery in Sagaing Hills for five years, where he also taught. He also gave meditation instruction at Thaung Gone Sasana Yeiktha and Zephupin Sasana Yeiktha.

In 1995, Ashin Ariyadhamma began studies at the Sitagu International Buddhist Academy (SIBA) in Sagaing Hills, in English under the guidance of its founder Sitagu Sayadaw.

In 1996 he also became a lecturer at SIBA, and in 1998 undertook further studies in India, wherein 2000, he received Master of Arts in Philosophy and Diploma in Buddhism from Bombay University. Upon returning to Myanmar he became the Assistant Registrar at SIBA and then, in 2002, Assistant Rector.

In 2003, Ashin Ariyadhamma moved to the United States for the propagation of the Buddhasasana, initially residing at the Dhammaloka Buddhist Vihara in Miramar, Florida. In December 2004 he moved to the Sitagu Buddha Vihara in Austin, Texas, as abbot, where he has overseen the Sitagu Shwe Si Khom Pagoda project under the auspices of Sitagu Sayadaw. From his home base in America, he has given Dhamma Talks in English, Burmese, and Pali throughout the United States and abroad. During this time he also completed his doctoral thesis, entitled "A Comparative Study of Meditation in Patanjali's Yoga Sutra and Buddhist Text" and received the Doctor of Philosophy from Kavikulaguru Kalidas Sanskrit University.

In recognition of his missionary work abroad Dr. Ashin Ariyadhamma was honored with the title of "Aggamahasaddhammajotikadhaja" by the Republic of the Union of Myanmar on the 71st Myanmar Independence Day, on January 4, 2019.

Email ThisBlogThis!Share to TwitterShare to FacebookShare to Pinterest
Labels: About

Ashin Ariyadhamma's Birthday Offering Ceremony at His Birth Place, May 15, 2021 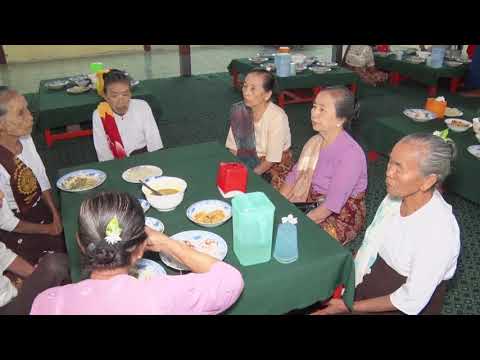